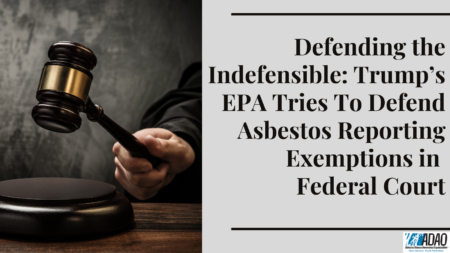 We know that EPA can hold asbestos importers and users responsible for reporting, thanks to  the Asbestos Information Act of 1988 which President Ronald Regan signed into law.

The Chemical Data Reporting (CDR) rule under TSCA requires manufacturers (including importers) to provide EPA with information on the production and use of chemicals in commerce; however, in 2017, EPA exempted asbestos from those requirements, finding that “reporting is not required for ‘naturally occurring chemical substances.”

In the hearing before Judge Chen, the US Department of Justice lawyer, Brandon Akins, a member of  the Trump Administration, continued to defend the CDR exemptions that let companies off the hook from disclosing how much asbestos is imported into the United States, how and where this asbestos is used and how many people are exposed. Asbestos has been found in children’s toys, such as crayons, and makeup, including from the popular tween brand Claire’s. It can also be found in imported products such as brake liners, exposing  millions of consumers and workers across the nation. The lack of reporting makes it impossible to protect against these risks.

Asbestos is a known carcinogen and kills nearly 40,000 Americans each year from diseases including, but not limited to, mesothelioma and cancers of the lungs, ovaries and larynx. The last attempt to ban asbestos was over 30 years ago, in 1989. The ban was overruled in court just two years later in a suit by industry, and since then, the U.S. government has continued to put profit over public health.

Alarmed and upset to learn that EPA considered asbestos exempt from CDR reporting, , ADAO and five public health groups petitioned EPA in September 2018 under section 21 of TSCA to close the reporting loopholes. Our petition demonstrated that without CDR reporting, EPA lacked the fundamental understanding of asbestos necessary to carry out its responsibility of conducting a meaningful risk evaluation of this lethal substance under TSCA. After EPA denied our petition and failed to justify its refusal to require reporting in December 2018, ADAO and the five co-petitioners filed suit against the Agency in February 2019.

“Yesterday’s hearing made clear once again that EPA lacks basic information on asbestos exposure and risk and has no credible excuse for failing to use its TSCA reporting authority to fill these glaring gaps in understanding,” stated Robert M. Sussman, ADAO Counsel. “As the Science Advisory Committee on Chemicals (SAAC) found, this lack of knowledge is among the many serious flaws in the draft asbestos risk evaluation and demonstrates that EPA is failing to  provide the protection against this lethal substance that Congress demanded when it amended TSCA in 2016.”

“On one hand, EPA admitted  there are huge data gaps in our understanding of asbestos risk, but on the other took the irresponsible position  before the court that  they shouldn’t be compelled to require importers and users of asbestos to provide data to fill those gaps,” said Celeste Monforton, DrPH, MPH a member of the American Public Health Association’s Occupational Health and Safety Section. “I am hopeful  that Judge Chen will see the contradictions and evasions in EPA’s position and  rule in our favor. Protecting public health from this deadly substance demands aggressive action to force the EPA to do the right thing.” APHA has been a leader in ban asbestos policy statements.

During the hearing, California Deputy Attorney General Elizabeth Rumsey reminded Judge Chen that EPA’s 2020 draft risk evaluation acknowledged the many ways in which the Agency could not assess the risks of asbestos in the absence of basic information. Rumsey stated, “It terrifies me as the mother of a four-year-old that this substance is coming in yarn, in crayons, in talc. For EPA to say, ‘we have all the information we need,’ the [draft risk evaluation] shows it was wrong then. It has not paid off. Those information gaps have not been filled.”

This case is proof that once again, Trump’s EPA is failing to protect American lives from the threat of asbestos. We need both a legal and legislative strategy in our fight against asbestos, which is why we continue to urge Congress to pass the Alan Reinstein Ban Asbestos Now Act (ARBAN). The bill would ban asbestos imports and use in just one year and would provide all Americans with the “Right to Know” where asbestos is used, along with forcing our country to do an intense investigation into where legacy asbestos can still be found.

Imports are on the rise yet again, and we are on track to import more asbestos this year than in 2019. We know that ARBAN has bipartisan support, as shown in the U.S. House of Representatives Committee on Energy and Commerce with its 47-1 vote. It is time for Congress members to reach across the aisle and pass this bill to save lives.

We are incredibly grateful to ADAO Counsel, Bob Sussman, for his tireless work and dedication to this case. His intelligence, energy, and courtroom skills are a blessing to this fight, and we at ADAO are indebted to him for all he has done to help Americans be safe from this deadly carcinogen. He did a remarkable job yesterday and we know he will continue to make our case heard loud and clear.

ADAO is joined in this legal action by the American Public Health Association, Center for Environmental Health, Environmental Health Strategies Center, Environmental Working Group, and Safer Chemicals, Healthy Families. ADAO is grateful for the parallel efforts of the 11 Attorneys General, whose case has now been joined to this one.

To all our supporters: We know that this legal battle has been long, and our fight to get a ban bill passed by Congress has been even longer. But yesterday’s hearing gave us hope, as it was clear that ADAO’s case was being heard and understood by Judge Chen. Changing public policy is glacially slow, but ADAO remains unrelentingly focused on improving the CDR rule and to pass ARBAN in this current Congress.

Our homes, schools, workplaces, consumer shelves, and our environment should be free from asbestos. Enough.