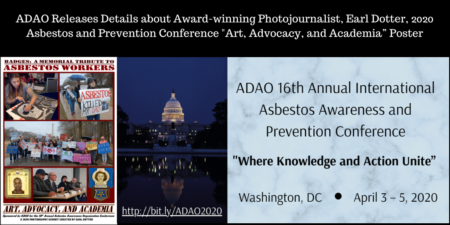 The Asbestos Disease Awareness Organization (ADAO) is thrilled to announce the Earl Dotter will be presenting the newest poster of his badges exhibit, “Badges: A Memorial Tribute to Asbestos Workers,” that honors firefighters, emergency responders and caregivers on the frontline of prevention and advocacy, at ADAO’s 16th Annual Asbestos Awareness and Prevention Conference, held this year April 3-5 in Washington, D.C. This year’s BADGES poster is entitled, “Art, Advocacy, and Academia” and is all about the voices behind the fight to ban asbestos.

The poster features Julie Gundlach, a nearly 13-year mesothelioma survivor, preparing for the first-ever March for Justice and Remembrance, held last year on March 5 in Washington, D.C. The march was organized in conjunction with ADAO’s annual 15th Annual International Asbestos Awareness and Prevention Conference and Day Five of Global Asbestos Awareness Week. Earl’s work shows other participants from the March, standing strong in the nation’s Capitol, sternly telling Congress that it’s time to ban the carcinogen once and for all.

This year’s poster also features a screening of the asbestos documentary Breathless with Dr. David Michaels at George Washington University held last year on April 4th. The film tells the story of Daniel Lambo, whose father worked for a Belgium asbestos company. Both Lambo and Eric Jonckheere, whose parents and two brothers died from mesothelioma, traveled to India to expose the truth behind asbestos mining and use. The documentary examines the impact on their life, as well as the relentless propaganda used by the industry to peddle asbestos in developing countries.

We are lucky to utilize Earl’s many posters in our advocacy and education programs. We bring them to schools and to Congress to show the human lives affected by asbestos and the lack of a ban. As a photojournalist, Earl is able to capture the impact of asbestos in a way that many can understand.

Earl’s previous posters masterfully capture the health impact and injustice of asbestos exposure. From the frontlines of 9/11 to the Mount Sinai Medical Center operating room — ‘asbestos fighters’ work diligently to prevent and cure deadly asbestos-caused diseases. His work has showcased the human toll this carcinogen takes on not only those who get sick, but everyone who knows the victim. The exhibit features ID badges worn by asbestos workers alongside historic photographs of work sites, product advertisements, vintage photos, and product catalogs from industrial companies, connecting the human faces to the industry.

BADGES features real life workers who spent their lives unknowingly mining and manufacturing products containing a lethal amount of asbestos, even though their employers knew the danger of the carcinogen. The badges capture the profit-over-people culture that threatened and eventually killed many of the faces you see in the poster. It is hard to emphasize how stunning, moving, and educational the work is, and we are incredibly grateful to Earl for continuing this project.

In 2016, Earl described the project in an ADAO blog in his own words: “The photo ID badges personalize the industrial victims of asbestos exposure. These badges appealed to me because personalizing my subjects who work in hazardous occupations has always been a primary goal for me. And what is unique about the badges is they name the companies that exposed the worker pictured on each badge. Quite naturally, it is easier to care about someone you are acquainted with. Viewers see a more personal side of this public health tragedy as a result. The panels make use of historical photographs and memorabilia that convey just how pervasive exposure to asbestos has been since the 1930’s and also point to important figures like Dr. Selikoff, Clarence Borel and Paul Brodeur who have taken active steps to draw attention to the harm from asbestos exposure and use.”

Two years ago, Earl’s BADGES poster featured ADAO Honorees, Firefighter Pat Morrison and Dr. Raja Flores, who both advocate for prevention and an asbestos ban in the USA and all over the world. He has previously honored Congresswoman Barbara Boxer, as well as Mike and Jessica Mattmuller. Mike was diagnosed with mesothelioma at just 29-years-old, yet he and Jessica decided to turn their anger into advocacy.

You can see Earl’s previous posters in the BADGES series here:

Two Earl Dotter Exhibits to be shown at the University of Texas Health Science Center at Tyler, TX

ADAO Introduces Earl Dotter’s 5th BADGES Poster: “Progress & Challenges from the Frontlines” at Our 15th Asbestos Awareness and PreventionWe hope you’ll take the time to look at Earl’s work. And don’t forget to register for our conference today! You can register here, and can learn about other speakers through our Meet the Speakers series.