The Power of Art: ADAO’s Cartoons Illustrates the Dangers of Asbestos — It’s Time for Congress to Ban Asbestos

As ADAO has said for years, “Hear Asbestos. Think Prevention.” 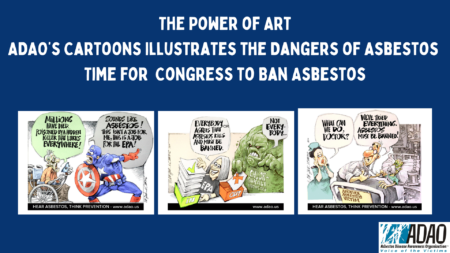 Art has always been a powerful tool for ADAO’s education, advocacy, and community efforts.  While I was working on my recent EPW hearing testimony, which you can watch here , I ran across three cartoons I had worked on with political cartoonists Dr Jack and John Curtis from South Africa back in 2016 when we were trying to use the LCSA to ban asbestos.

These cartoons and their messages are more pertinent now than ever before. In the first quarter of 2022, raw asbestos imports into the country exceeded the total amount of asbestos imported in 2021, 114 metric tons and 100 metric tons respectively. EPA’s recent dangerously narrow Asbestos Risk Assessment proposal only includes one asbestos fiber and six conditions of use. This completely disregards the scientific proof that exposure to all types of asbestos cause deadly illnesses.

Over 40,000 Americans die each year from asbestos-related diseases. The latency period of an asbestos-caused illness is anywhere between 10-50 years. Asbestos exposure causes fatal illnesses such as mesothelioma and cancers of the lung, larynx, and ovaries. 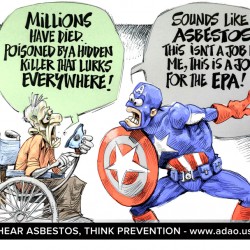 The first of the trilogy of political cartoons showcased our David v. Goliath battle against the asbestos industry. During that fight, we’ve used just about every tool in the box to get our message across. This was the first time we’ve used cartoons like this, and we had hoped it  would be the thing to show the EPA how badly we need their protection.

The second cartoon called out the chlor-alkali industry for importing and using asbestos even though it kills. 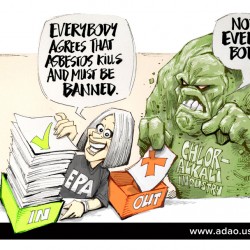 Lastly, like many of you, this final cartoon is important because it depicted the final moments of my husband Alan’s life as he fought for each breath. This cartoon addresses the fact that by the time someone is aware that they’ve been exposed to asbestos, many times, it is already too late.

The image shows a victim dying in a hospital bed. A distraught nurse is asking what they can do to save the patient, and the doctor says, “We’ve tried everything. Asbestos must be banned!” Through this art, the harsh reality of how there is no safe level of exposure to asbestos is shown. It sends the message that we must hear asbestos and think prevention because we have done everything we can. It is time for Congress to act. 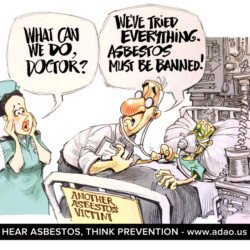 The United States is one of the last industrialized nations to not ban asbestos, as nearly 70 other countries have banned imports and use of the lethal carcinogen. It is far past time for the U.S. to catch up with our peers. The last time our country tried to ban asbestos was in 1991, and since then, more than one million Americans have died from preventable asbestos-caused diseases. Think about that for a moment: 1 million families, like mine, have lost a loved one to this toxic chemical.

ADAO urges the U.S. Senate Environment and Public Work (EPW) to hold a hearing to advance the Alan Reinstein Ban Asbestos Now (ARBAN) Act of 2022 which is championed by Senator Jeff Merkley and Congresswoman Suzanne Bonamici. Although EPA’s Part 1 chrysotile asbestos proposed rule that bans six conditions of use — Americans deserve more. We need Congress to pass ARBAN banning all six fibers and any and all conditions of use to save lives.

We hope that someday soon this cartoon serves merely as a historic reminder of a darker time. We need to ban asbestos for once and for all.

Together, we can make change happen.