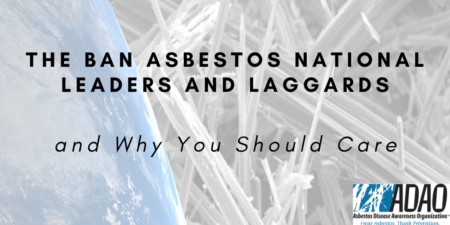 One fact alone should be evidence enough for an all-out asbestos ban: All types of asbestos cause lung cancer and mesothelioma, according to the World Health Organization, as well as cancer of the larynx and ovary, and asbestosis (fibrosis of the lungs). Exposure to asbestos occurs through “inhalation of fibers in the air, in the working environment, ambient air in the vicinity of point sources such as factories handling asbestos, or indoor air in housing and buildings containing friable (crumbly) asbestos materials.” There is no safe level of exposure.

However, despite many urgent moral, political, and ecological imperatives to act on asbestos, a simpler, more tangible argument also exists for a federal asbestos ban in the United States: we’re essentially the only industrialized western country left on Earth without an asbestos ban.

Asbestos exposure is a pressing public health crisis, claiming the lives of nearly 40,000 American citizens every single year. It is also brings to question how we treat our workforce — American teachers, firefighters, and construction workers are among some of the most vulnerable to this lethal fiber. The changing climate also raises additional concerns. As rising global temperatures drive more intense and dangerous weather, damage to old buildings built with “legacy” asbestos (most buildings built before 1970 still contain asbestos), likely increases potential exposure to the known carcinogen

The United States has a long, complicated history with asbestos, fraught with countless preventable deaths and several failed attempts to ban the fiber. Last year marked 30 years since the last proper effort to do so, which was eventually defeated in court by industry lobbyists, providing an appropriate moment for studying the role this carcinogen has played in the United States. Since 1989, more than one million Americans have died as a result of asbestos exposure, and about $100,000,000 USD has been spent importing 375,000 metric tons of the mineral.

To date, nearly 70 nations have enacted federal legislation to prohibit the use, imports, and/or mining of asbestos. Beginning in 1983, when Iceland prohibited all imports of the fiber, the world’s industrialized nations began steadily passing legislation to prevent the circulation and use of this known carcinogen. Norway did the same in 1984 and several Middle Eastern countries followed suit in the 1990s, including Kuwait (1995), Bahrain (1996), and Saudi Arabia (1998). To be clear, no U.S. company would dare manufacture asbestos products; however, some companies knowingly import asbestos products. Without a ban — profits trump public health.

The United States now lags decades behind the European Union on asbestos policy, as the 28-nation bloc saw the last of its members ban the mineral in 2005. A still harsher contrast was drawn in 2018, when neighboring Canada passed a federal ban bill of their own. Russia, China, Kazakhstan, and India remain alongside the U.S. in continuing to allow the fiber’s use.

Despite this global trend, buoyed by public health demands and ecological necessity, asbestos imports are booming in the United States. In 2018, the most recent year for which the United States Geological Survey has reported on these figures, the U.S. imported 750 metric tons of the mineral, more than double 2017’s total. The bulk of this asbestos was exported from Brazil, but, as that nation banned the mineral that same year, the United States has since imported all asbestos from Russia.

Now you know the truth about the ban asbestos leaders and laggards and why you should care. With the Alan Reinstein Ban Asbestos Now Act of 2019 (ARBAN) progressing through Congress, the U.S. now has another chance to redirect our checkered past toward a safer future. By banning all imports and use, increasing transparency standards for the asbestos industry, and mandating risk evaluations for legacy asbestos, ARBAN promises to catch the United States up with the rest of the world. It is time we pass legislation of this pedigree and join our peers around the globe with a 21st century plan to keep our people safe.

The international ban asbestos list is compiled from The Asbestos Safety and Eradication Agency and the International Ban Asbestos Secretariat, and ADAO’s research.